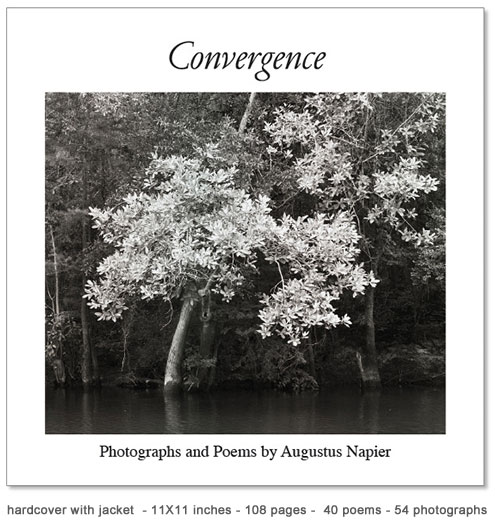 These intimately linked poems and photographs by Augustus Napier call upon the summative power of word and image to tell stories. The stories are mainly about the author’s love of places and people, of life’s small details, of the sweep of landscape. Some stories are celebratory; in others the irony and ambiguity of life insert themselves.

The first section, “In the Mountains,” richly portrays the author’s love of his adopted home: its rock faces, its domed hills, its fiercely independent people. There is the story of a retired bootlegger, of an old woman who runs a local service station and store, of the remnants of a town subsumed by a national park, of the evocative landscapes of the mountainsides in spring and fall.

The most lyrical section, “The Land and the Sea” portrays the coastline as a metaphor for life’s uncertain, wavering boundaries. A boy tends his “orchestra” of gulls after a fight with his father; a couple mourns their decision to sell their seaside home; there is a meditation on the sea as lover and muse.

“Finding Home” evokes the author’s origins in southern Georgia and is the book’s most somberas well as its most tender section. Here is a beach laden with childhood memories; a black-water river prompts a poem about Napier’s troubled relationship with his father. Some poems rise out of flash-backs from contemporary scenes. There is a portrait of his beloved uncle holding out at eighty-six on the family farm. Memories of being read to by his mother shadow his reading to his grandson, who is from Argentina.

The book begins with a photograph and poem about the Napiers’ children in the threatening blast of a lawn sprinkler, and it ends with the section, “Away,” which follows their adult children to their chosen homes and accompanies them on some shared foreign travel. Everywhere in this book there is grief about the fleeting nature of time; everywhere gratitude for the pleasures of living in the present.